Home
percentage
How to Calculate a Percentage Increase.

Prior to discussing how to calculate a percentage increase, let’s know what it is all about. When comparing how much a value has increased over time, you would first find the difference between the initial and final values by subtracting them to find the exact amount of the increase.

Percentage increase is a measure of percent change, which is the extent to which a variable gains intensity, magnitude, extent, or value.

To calculate the percentage increase, we assume that both the initial and the final quantities are absolute values.

Percentage increase is for example used by companies to describe their success as an increase in profit levels.

To calculate the increase we use the following formula.

To calculate the percentage increase we use the following formula.

Calculating % increase is useful in various daily applications such as finance, sales, tax and inflation rate, physics and other fields of mathematics.

The initial price of a pair of stilettos was $20. The price was increased to $23 due to high demand. Calculate the % increase.

We begin by finding the difference between the initial and the final value.

Then we divide the increase by the initial number and multiply by 100.

Therefore, the percentage increase of the price is 15%. 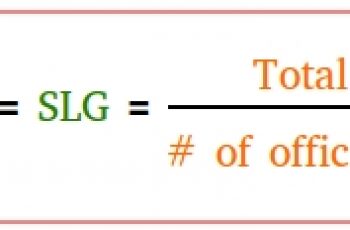 What is Slugging Percentage? In baseball statistics, slugging percentage also …

Sometimes calculating something and coming up with an answer isn’t …